Monocoque (French for "single shell") or unibody is a construction technique that uses the external skin of an object to support some or most of the load on the structure. This stands in contrast with using an internal framework (or truss) that is then covered with a non-load-bearing skin. Monocoque construction was first widely used in aircraft, starting in the 1930s, and is the predominant automobile construction technology today.

Prior to this time aircraft were built up from an internal frame, typically of wood or steel tubing, which was then covered (or skinned) with fabric to give it a smooth surface. The materials vary; some builders used sheet metal or plywood for the skin. In all of these designs the idea of load-bearing structure vs. skin remained.

By the late 1920s the price of aluminium (specifically duralumin) started dropping considerably and many manufacturers started using it to replace the internal framing, and in some cases, the external skin. A classic example of such a design is the Ford Trimotor, which is an "old style" plane built of new materials. The structure of the plane consists of a latticework of U-shaped aluminium beams, with a thin skin of aluminium rivetted on top.

When these designs started appearing it was realized that the skin itself had significant structural properties of its own. With a sufficient thickness, one could do away with all of the internal structure. However this would be even heavier than the framing would have been. At thinner gauges the skin could easily provide the structure for tension and shear loads (metal resists being pulled apart quite well), and if it was bent into a curve or pipe, it became quite strong against bending loads as well. The only loading it could not handle on its own – at least for thin "skins" – was compression. Combining this sort of structural skin with a greatly reduced internal framing to provide strength against buckling in compression led to what is known as "semi-monocoque".

The result was a structure that was just as strong as ones made with older methods, but weighed considerably less. For aircraft construction this is a very important consideration. As well, the monocoque structure has high torsional stiffness, important in reducing aeroelastic effects as aircraft speeds increased. At the beginning of World War II the technique was just starting to appear, and many aircraft still used mixed construction. By the end, all planes were monocoque. 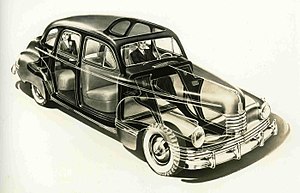 The first automotive application of the monocoque technique was 1923's Lancia Lambda. Citroën built the first mass-produced monocoque vehicle in 1934, the innovative Traction Avant. The popular Volkswagen Beetle also used a semi-monocoque body (its frame required the body for support) in 1938.

In the post-war period the technique became more widely used. The Alec Issigonis Morris Minor of 1948 featured a monocoque body. The Ford Consul introduced an evolution called unit body or unibody. In this system, separate body panels are still used but are bolted to a monocoque body-shell. Spot welded unibody construction is now the dominant technique in automobiles, though some vehicles (particularly trucks) still use the older body-on-frame technique.

Some American automobiles, such as the 1967 Chevrolet Camaro, used a compromise design with a partial monocoque combined with a subframe carrying the front end and powertrain. The intention was to provide some of the rigidity and strength of a unibody while easing manufacture, although the results were mixed, in large part because the powertrain subframe contained the greatest single portion of the vehicle's overall mass, and thus movement of the subframe relative to the rest of the body could cause distortion and vibration. Subframes or partial subframes are still sometimes employed in otherwise monocoque construction, typically as a way of isolating the vibration and noise of powertrain or suspension components from the rest of the vehicle.

In automobiles, it is common to see true monocoque frames, where the structural members around the window and door frames are built by folding the skin material several times. In these situations the main concerns are spreading the load evenly, having no holes for corrosion to start, and reducing the overall workload. Compared to older techniques, in which a body is bolted to a frame, monocoque cars are less expensive and stronger.

Monocoque design is so sophisticated that windshield and rear window glass now often make an important contribution to the designed structural strength of automobiles.

The term has also been used for architecture (building construction) by Future Systems of the United Kingdom.

Some racing bicycles are using carbon fibre Monocoque diamond frames, in order to reduce the overall weight of the vehicle.