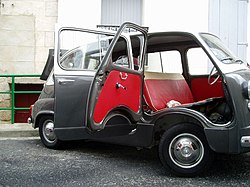 Suicide doors are automobile doors that are hinged on the trailing edge; the edge closer to the rear of the vehicle. The term reflects a perceived increased danger of the door falling open if it becomes unlatched while the car is moving. Because of the obviously negative connotations, the term is avoided in major automobile manufacturers' promotional literature, although it is familiar to many English-speakers and often used openly in the custom-car trade.

The door arrangement also instills other negative perceptions. While the vehicle is parked, such a door would hide an entering or exiting passenger from the view of passing cars. The result of the door being hit by another vehicle would likely be more catastrophic, since the door would be slammed shut onto the passenger, even if merely nicked the outside edge. In contrast, a door hinged at the front would be pushed away from the passenger and possibly torn off entirely.

Another problem presented by conventionally hinged doors in front and suicide doors in the rear (on a four door vehicle) is a passenger traffic conflict. It is almost impossible for passengers to exit from the front and rear seats simultaneously due to the limited space between the front edge of the rear door and the rear edge of the front door.

An arrangement where only the rear doors on a four door vehicle open in this fashion is sometimes called "kidnapping doors", presumably because it would make it easier to drag a victim into the car.

The advantage of rear hinged doors is that it makes it easier to get in or out of the vehicle. An additional advantage of rear-hinged rear doors (especially with front-hinged front doors) is that this arrangement makes it easier for a person in the front seat (for example, a chauffeur) to exit the car and get to the handle of the back door to open it for the passenger.

Such doors were not uncommon on cars manufactured in the first half of the 20th century. Post-World War II examples are almost universally the rear doors of four-door cars.

The most well-known use of suicide doors on post-World War II automobiles was the glamorous Lincoln Continental sedan from 1961 through 1969, and even more dramatically, on the unique Lincoln Continental 4-door convertible from 1961 through 1967 (the last 4-door convertible built in the United States.) Since the 4-door Lincoln convertible did not have a center "B" pillar, the rear door glass was designed to electrically retract a few inches when the rear doors were opened in order for the weatherstripping to clear the front door glass. This meant that if the battery was dead, the only way out of the back seat was to crawl over the front seat.

For a time, the last true, independently opening suicide doors were fitted on the Ford Thunderbird 4-door sedan from 1967 through 1971, after which their use ceased due to safety concerns. More recently, rear suicide doors that cannot be opened until the regular front doors are opened have been appearing on a number of vehicles, including extended cab pickup trucks, the Saturn Ion QuadCoupe, and the Mazda RX-8. Nevertheless, in 2003, true independent suicide doors reappeared, this time on the new Rolls-Royce Phantom. The Spyker D12, officially presented in 2006, also has suicide doors. The upcoming Rolls-Royce Phantom Drophead Coupe 4-seat convertible based on the 100EX show car has suicide front doors.

The song "First Kiss" by Tom Waits (which can be found on Waits' 2006 relaese "Orphams") begins with the line, "She drove a big old Lincoln with suicide doors and sewing machine in the back..." 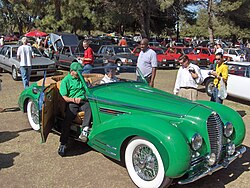 Models of automobile that featured suicide doors include: