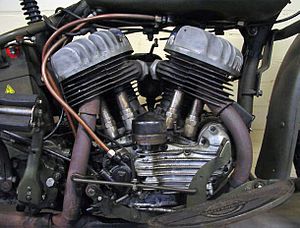 Flathead engine refers to an internal combustion engine that has the valves placed in the engine block beside the piston, instead of in the cylinder head, as in an overhead valve or OHV engine. The design was common on early engine designs, but has since fallen from use.

Generally the flathead engine uses a small chamber on one side of the cylinder to carry the valve. This has a number of advantages, primarily that it makes the cylinder head itself much simpler. It also means that the valve can be operated by pushing directly up on it, as opposed to needing some sort of mechanical arrangement to push down as on a "valve-in-block" engine. It may also lead to slighly easier cooling, as the valves and operating rods are out of the way of the cylinder, making a cooling jacket simpler to construct (but see below). The line of intakes along the side of the engine leads to the alternate name L-block (or L-head), due to the cylinders having the shape of an upside-down L.

On the downside, the flathead engine also requires the airflow to make at least a 90-degree turn to enter the cylinder, which makes it less effecient; colloquially it's said that such an engine has poorer "breathing". In the early days all engines had poor combustion anyway, so this was a minor concern given the benefits in simplicity.

A more serious concern is that the exhaust often follows a more complicated path to leave the engine. This virtually guarantees that the engine will overheat under sustained steady heavy use. It is sometimes possible to arrange the engine layout so the exhaust will be taken through a second set of similar chambers moved to the other side of the cylinder, in which case the layout is referred to as a T-block.

Although flathead in-line 4 and 6 cylinder engines were frequently used for automobiles, tractors, etc., the best known flathead automotive engine is the Ford Flathead engine early 20th century Ford V-8, which has both sets of valves (intake and exhaust) located on the inside of the "Vee," and which are all operated by a single camshaft located above the crankshaft.

Due to the heating and effeciency problems, flathead engines fell from "high power" uses such as aircraft engines fairly quickly, prior to World War I. However they lived on for some time in the automotive world, and were used on the Jeep for instance. Flatheads are no longer in common use for automobiles, although they are still used for some small-engine applications like lawnmowers. Because of their design, the size of valves and the compression ratio are limited, which in turn reduces available power and economy.