From WOI Encyclopedia Italia
Jump to navigation Jump to search
File:Oldtimer-Dashboard.jpg
A dashboard from a 1940s car

The dashboard of a modern car, a Bentley Continental GT 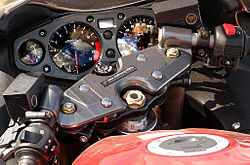 A dashboard or dash board (sometimes facia in British English) in an automobile is a panel located under the windscreen and containing indicators and dials such as the tachometer, speedometer, odometer, and fuel gauge. One of the safety enhancements of the 1970s was the widespread adoption of padded dashboards. In the 1990s, driver's side airbags became mandatory and passenger-side airbags became widespread.

There are a wide variety of dashboards used in various applications.

Custom-built coupé race cars often simply have a piece of sheet metal that forms the dash. Whenever a new gauge needs to be added, a hole is drilled in the appropriate location and it is simply screwed on.

Open wheel race cars have no space for a dash, so the instrument cluster is integrated into the center of the steering wheel.

Motorcycles and mopeds have a compressed version of car dashes, but sometimes have enough room to contain tape decks, GPS navigation, and the like.

When car radios became available, they were mounted on or underneath mid-20th-century car dashboards.

Things found on a dashboard

Many different things are mounted on dashboards. The most important items located on the dashboard are the steering wheel and the instrument cluster. An instrument cluster contains instrument gauges such as a speedometer, tachometer, odometer, and fuel gauge.

The top of a dashboard usually contains speakers for the audio system, and vents for the heating and A/C system. A glovebox is often found on the passenger side.

In more modern cars, automotive navigation systems are mounted in the dashboard.

The dashboard controls indicate the speed of a car.

The firewall separates the dash from the engine compartment