A supercharger (also known as a blower) is an air compressor used to compress air into the cylinders of an internal combustion engine. The additional mass of oxygen-containing air that is forced into the cylinders improves the volumetric efficiency of the engine which allows the engine to burn more fuel and makes it more powerful. A supercharger can be powered mechanically by belt-, gear- or chain-drive from the engine's crankshaft. It can also be powered by a gas turbine . When a centrifugal type compressor section is mated to a gas turbine drive it is then referred to as a turbo-supercharger, commonly called a turbocharger . Positive displacement Superchargers may absorb as much as a third of the total crankshaft power of the engine, and in many applications are less efficient than turbochargers. In applications where engine response and power is more important than any other consideration, such as top-fuel dragsters and vehicles used in tractor pulling competitions, positive displacement superchargers are extremely common.

To supercharge means to fill beyond its actual physical capacity. Any device that does this to an engine is a supercharger.

There are two main types of supercharger defined according to the method of compression. Positive displacement and dynamic compressors.

Positive displacement pumps deliver a fixed volume of air per revolution at all speeds. The device divides the air mechanically into parcels for delivery to the engine, mechanically moving the air into the engine bit by bit.

Dynamic compressors rely on accelerating the air to high speed and then exchanging that velocity for pressure by diffusing or slowing it down.

(Note: Comprex superchargers do not fit neatly into either category, being part fish and part fowl. The Comprex design uses the exhaust gas to directly compress the incoming charge.)

Superchargers are further defined according to their method of drive.

All of the types of compressors may be mated to and driven by either gas turbine or mechanical linkage. Dynamic compressors are most often matched with gas turbine drives due to their similar high-speed characteristics, while positive displacement pumps usually use one of the mechanical drives. However, all of the possible combinations have been tried with various levels of success. 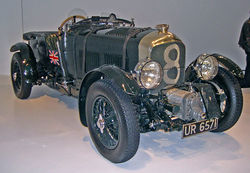 1929 "Blower" Bentley from the Ralph Lauren collection. The large "blower" (supercharger) is located at the front, in front of the radiator, and gave the car its name.

In cars, the device is used to increase the "effective displacement" and volumetric efficiency of an engine, and is often referred to as a blower. By pushing the air into the cylinders, it is as if the engine had larger valves and cylinders, resulting in a "larger" engine that weighs less.

In 1900 Gottlieb Daimler (of Daimler-Benz / Daimler-Chrysler fame) became the first person to patent a forced-induction system for internal combustion engines. His first superchargers were based on a twin-rotor air-pump design first patented by American Francis Roots in 1860. This design is the basis for the modern Roots type supercharger.

Boosting, or adding a supercharger to a stock naturally-aspirated engine, has made something of a comeback in recent years due largely to the increased quality of the alloys and machining used in modern engines. In the past, boosting would dramatically shorten an engine's life due to the extreme temperature and pressure created by the supercharger, but modern engines produced with modern materials provide considerable overdesign and boosting is no longer a serious reliability concern. For this reason boosting is commonly used in smaller cars, where the added weight of the supercharger is less than the weight of a larger engine delivering the same amount of power. This also results in better gas mileage, as mileage is often a function of the overall weight of the car, a sizeable percentage of which is weight of the engine. Nevertheless, adding boost to a car will often void the drivetrain warranty. Also, improperly installed or excessive boost will greatly reduce the life expectancy of both the engine as well as the transmission (which may not have been designed to cope with additional torque).

A more natural use of the supercharger is with aircraft engines. As an aircraft climbs to higher altitudes the pressure of the surrounding air quickly falls off—at 6000 m (18,000 ft) the air is at half the pressure of sea level. Since the charge in the cylinders is being pushed in by this air pressure it means that the engine will normally produce half-power at full throttle at this altitude.

A supercharger remedies this problem by compressing the air back to sea-level pressures, or even much higher. This can take some effort. On the single-stage single-speed supercharged Rolls Royce Merlin engine for instance, the supercharger uses up about 150 horsepower (110 kW). Yet the benefits are huge, for that 150 hp (110 kW) lost, the engine is delivering 1000 hp (750 kW) when it would otherwise deliver 750 hp (560 kW). And while the engine might be fooled into thinking it's at sea level, the airframe is quite aware of the halved air density and the plane thus has half the drag. For this reason supercharged planes fly much faster at higher altitudes.

A supercharger is only able to supply so much pressure because the compression increases the air temperature, and the engine is limited in maximum charge-air temperature before pre-ignition occurs. The boost is typically measured as the altitude at which the supercharger can still supply sea level pressure (100 kPa or 1000 mbar) and is referred to as the critical altitude. Throughout WWII British superchargers generally had higher critical altitudes than their German counterparts and, when combined with higher octane fuels that the Americans supplied, that allowed for higher boost levels. British engines were generally able to outperform German ones.

Below the critical altitude the supercharger is capable of delivering too much boost and must therefore be restricted lest the engine be damaged. Unless other measures are taken, this means that at least some of the power driving the supercharger is wasted. Also, due to the denser air at lower altitudes, the supercharger is not operating at its best efficiency, and this can cause an additional load on the engine.

For the early years of the war this was simply how it was and this led to the seemingly odd fact that many early-war engines actually delivered less power at lower altitudes, because the supercharger was still using up power to compress air that was not delivering any power back. As the war progressed two-speed superchargers were introduced using better controllers and, notably, hydraulic clutches, that allowed the boost to be managed over a wide range of altitudes by operating at low rpm down low and at high rpm at higher altitudes. This generally "flattened out" the power below the critical altitude.

In the 1930s two-speed drives were developed for superchargers. These provided more flexibility for the operation of the aircraft although they also entailed more complexity of manufacturing and maintenance. Ultimately it was found that for most engines (excepting those in high-performance fighters) a single-stage two-speed setup was most suitable.

A final improvement was the use of two compressors in series, which were introduced to solve the pre-ignition problem. Compressing a gas always causes its temperature to rise, and an overcompressed fuel-air mixture may therefore prematurely ignite. In order to avoid pre-ignition the "two stage" design was used. After being compressed "half-way" in the low pressure stage the air flowed through an intercooler radiator where it was partially cooled down before being compressed the rest of the way in the high pressure stage and then aftercooled in another air/air or coolant/air radiator (heat exchanger). At low altitudes one stage could be turned off completely. The two-stage Merlin was losing 400 hp (300 kW) to turn the supercharger but developing between 1500 and 1700 hp (1125 to 1275 kW) at the propeller shaft, depending on model.

It is interesting to compare all of this complexity to the same system implemented with a turbocharger. Since the turbo is driven off the exhaust gases, simply dumping some of the exhaust pressure is sufficient to drive the compressor at almost any desired speed. In addition the power in the exhaust would otherwise be wasted (except to the extent that the exhaust itself provided thrust) whereas in the supercharger that power is being taken directly from the engine. Thus at low altitudes the turbo robs nothing and, as the altitude increases, it can use just as much power as it needs and no more. Better yet the amount of power in the gas is the difference between the exhaust pressure and air pressure, which increases with altitude, so turbochargers generally have much better altitude performance.

Yet the vast majority of WWII engines used superchargers, because they maintained three significant manufacturing advantages over turbochargers, which were larger, involved extra piping, and required exotic high-temperature materials in the turbine. The size of the piping alone is a serious issue; consider that the Vought F4U and Republic P-47 used the same engine but the huge barrel-like fuselage of the latter was, in part, needed to hold the piping to and from the turbocharger in the rear of the plane.

The physical space occupied by a turbocharger is significantly less than its direct-drive counterpart. This gives the opportunity of fitting multiple turbochargers to a single engine, such as in a "sequential turbo", where one turbo is tuned to give increased performance at low engine speed and another turbo is tuned to increase the high-speed engine performance.

An alternative arrangement utilizes two turbochargers of the same type, known as a "twin turbo". This gives a large power increase for a given engine speed at the cost of increasing the lag-time for the exhaust to heat up sufficiently to drive the turbochargers. This lag can be addressed by reducing the size of each individual unit such that the combined output is still as great as a single large turbocharger without having to suffer the lag-time required to reach operating speed.

The thermal efficiency, or fraction of the fuel/air energy that is converted to output power, is less with a mechanically driven supercharger than with a turbocharger, because the energy of the exhaust pressure is lost. For this reason, both the economy and the power of a turbocharged engine are usually better. The main advantage of an engine with a mechanically driven supercharger is better throttle response. This is important in dragsters and small sports cars. It also tends to run cooler.

It is also possible to drive the blower from the crank shaft and use an exhaust turbine for output power.

Supercharging is not confined to superchargers — jet engines rely on supercharging as one of the main routes to thrust growth and improved fuel efficiency.

For example, adding an additional (i.e. zero) stage to a compressor will not only increase the overall pressure ratio of the cycle, but induce more airflow into the unit, by supercharging the entry plane of the original compressor. Ideally, the corrected (i.e. non-dimensional) speed of original compressor should be maintained, by raising the mechanical shaft speed by a factor √(Tstage1new/Tstage1old). If stress considerations prevent any shaft speed increase, there is only a modest increase in airflow.

Converting a turbojet into a turbofan, by adding a fan spool, also supercharges the compression system, thereby raising core flow.

Many of the large turbofan engine series (e.g. Pratt and Whitney PW4000) have gained core flow by adding one or more stages to the front of the gas generator, usually in the LP (or IP) compressor. If the fan flow is not increased, the bypass ratio will decrease.

Supercharging can also be achieved by improving the aerodynamics of the existing blading. Core flow will increase if the original compressor outlet (corrected) flow size is maintained