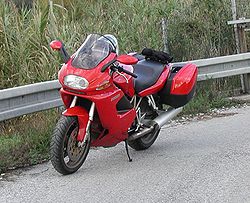 From their first post-Second World War bicycle-like low-displacement motorbikes Ducati has gained prominence in motorcycle racing and in the motorcycle industry.

In the 1960s, Ducati earned its place in motorcycling history by producing the then fastest 250 cc road bike available, the Mach 1. In the 1970s Ducati began producing large-displacement L-twin (i.e. a 90° V-twin) motorcycles and in 1973 released an L-twin with the trademarked desmodromic valve design. In 1985, Cagiva bought Ducati and planned to rebadge Ducati motorcycles with the lesser-known Cagiva name (at least outside of Italy). By the time the purchase was completed, Cagiva kept the "Ducati" name on its motorcycles. In 1996, Texas Pacific Group bought for US$325 million a 51% stake in the company and in 1998, bought the remaining 49% and became the sole owner of Ducati. In 1999, TPG issued an IPO of Ducati stock and renamed the company Ducati Motor Holding SpA. TPG sold over 65% of its shares in Ducati. In December 2005 Ducati returned to Italian ownership with the sale of Texas Pacific's stake (minus one share) to Investindustrial Holdings, the investment fund of Carlo and Andrea Bonomi.

In 1926 three brothers, Adriano, Marcello and Bruno Ducati, founded Societa Scientifica Radio Brevetti Ducati in Bologna to produce tubes, condensers and other radio components, becoming successful enough by 1935 to construct a new factory in the Borgo Panigale area of the city. During the war, although the Ducati factory was a repeated target for Allied bombing, production was maintained.

Meanwhile, at the small Turinese firm SIATA (Societa Italiana per Applicazioni Tecniche Auto-Aviatorie), Aldo Farinelli began developing a small pushrod engine for mounting on bicycles. Barely a month after the official liberation of Italy in 1944, SIATA announced its intention to sell this engine, called the "Cucciolo" (Italian for "puppy," in reference to the distinctive exhaust sound) to the public. The first Cucciolos were available alone, to be mounted on standard bicycles, by the buyer; however, businessmen soon bought the little engines in quantity, and offered complete motorized-bicycle units for sale.

When the market moved toward larger motorcycles, Ducati management decided to respond, making an impression at an early-1952 Milan show, introducing their 65TS cycle and Cruiser (a four-stroke motor scooter). Despite being described as the most interesting new machine at the 1952 show, the Cruiser was not a great success, and only a few thousand were made over a two-year period before the model ceased production.

The company's offerings have improved and diversified since then.

In the 1960s, Ducati earned its place in motorcycling history by producing the then fastest 250 cc road bike available, the Mach 1. In the 1970s Ducati began producing large-displacement L-twin (i.e. a 90° V-twin) motorcycles and in 1973 released an L-twin with the trademarked desmodromic valve design. In 1985, Cagiva bought Ducati and planned to rebadge Ducati motorcycles with the lesser-known Cagiva name (at least outside of Italy). By the time the purchase was completed, Cagiva kept the "Ducati" name on its motorcycles. In 1996, Texas Pacific Group bought a 51% stake in the company for US$325 million then in 1998, bought most of the remaining 49% to become the sole owner of Ducati. In 1999, TPG issued an IPO of Ducati stock and renamed the company Ducati Motor Holding SpA. TPG sold over 65% of its shares in Ducati, leaving TPG the majority shareholder. In December 2005 Ducati returned to Italian ownership with the sale of Texas Pacific's stake (minus one share) to Investindustrial Holdings, the investment fund of Carlo and Andrea Bonomi.

From the 1960s to the 1990s, the Spanish MotoTrans company licensed Ducati engines and produced motorcycles that, although they incorporated subtle differences, were clearly Ducati-derived. MotoTrans's most notable machine was the 250 cc 24 Horas (Spanish for 24 hours). A 285 cc version of this bike won the Barcelona twenty-four-hour race at the Montjuic circuit for three consecutive years, 1956 to 1958.

Ducati is best known for high performance motorcycles characterized by large capacity four-stroke, 90-degree L-twin engines featuring a desmodromic valve design. Modern Ducatis remain among the dominant performance motorcycles available today partly because of the Desmodromic valve design, which is nearing its 50th year of use. Desmodromic valves are closed with a separate, dedicated cam lobe and lifter instead of the conventional valve springs used in most internal combustion engines. This allows the cams to have a more radical profile, thus opening and closing the valves more quickly without the risk of valve-float which is likely when using a "passive" closing mechanisms under the same conditions.

While most other manufacturers utilize wet-clutches (with the spinning parts bathed in oil) Ducati uses multiplate dry clutches in many of their current motorcycles. The dry clutch eliminates the power loss from oil viscosity drag on the engine even though the engagement may not be as smooth as the oil bath versions, and the clutch plates can wear more rapidly.

The chief designer of Ducati motorcycles from the 1950s was the late Fabio Taglioni (1920-2001). He designed most Ducatis during this period, ranging from the small single cylinder machines that were successful in the Italian 'street races' up to the large capacity twins of the 80s. Ducati introduced the Pantah in 1979; its engine was updated in the 1990s in the Ducati SuperSport (SS) series. All modern Ducati engines are derivatives of the Pantah, which uses a toothed belt to actuate the engine's valves. Taglioni used the prancing horse (identified with the Ferrari brand) on his Ducati motorbikes, Taglioni chose this emblem of courage and daring as a sign of respect and admiration for Francesco Baracca, a heroic World War I fighter pilot that died during an air raid in 1918.

In 1973, Ducati also commemorated its 1972 win at the Imola 200 with the production model green frame Ducati 750 SuperSport.

(In 2006 the retro styled Ducati PaulSmart1000LE, which shares styling cues with the 1973 750 SuperSport (itself a production replica of Paul Smart's 1972 race winning 750 Imola Desmo) was released, as one of a SportClassic series representing the 750 GT, 750 Sport, and 750 SuperSport Ducati motorcycles.)

Ducati's liquid-cooled multi-valve V twins made from 1985 on are known as Quattrovalvole ("four-valve"). These include the 916 and 996, 999 and a few predecessors and derivatives.

In 1993, Miguel Angel Galuzzi introduced the Ducati Monster, a naked bike with exposed trellis and engine. Today the Monster accounts for almost half of the company's worldwide sales. The Monster, which has been out since 1994, has undergone the most changes of any motorcycle that Ducati has ever produced. After more than a decade of manufacturing, Ducati continues to create innovative changes to this classic motorcycle.

In 1995, the company introduced the Ducati 916 model designed by Massimo Tamburini, a water-cooled version that allowed for higher output levels and a striking new bodywork that featured aggressive lines, underseat exhausts, and a single-sided swingarm. Ducati has since ceased production of what many called the bike of the 1990s, supplanting it with the 749 and 999.

For the 2008 model year, Ducati lineup is as follows:

Ducati (in its various incarnations) has produced several styles of motorcycle engines, including varying the number of cylinders, type of valve actuation and fuel delivery. Ducati is best known for its "L-Twin" motor which is the powerplant in the majority of Ducati-marqued motorcycles. Ducati has also manufactured engines with one, two, three or four cylinders; operated by pull rod valves and push rod valves; single, double and triple overhead camshafts; two stroke and even at one stage manufactured a stationary diesel engine, many of which were used as emergency pumps (eg for fire fighting). They have also produced outboard motors for marine use. Currently, Ducati makes no other engines except for its motorcycles.

On current Ducati motors except for the Desmosedici, the valves are actuated by a standard valve cam shaft which is rotated by a timing belt driven by the motor directly. The teeth on the belt keep the camshaft drive pulleys indexed. On older Ducati motors, prior to 1986, drive was by solid shaft that transferred to the camshaft through bevel-cut gears. This method of valve actuation was used on many of Ducati's older single cylinder motorcycles - the shaft tube is visible on the outside of the cylinder.

Ducati is also famous for using the desmodromic valve system championed by engineer and designer Fabio Taglioni though they have also used engines that use valve springs to close their valves. In the early days, Ducati reserved the desmodromic valve heads for its higher performance bikes and its race bikes. These valves do not suffer from valve float at high engine speeds, thus a desmodromic engine is capable of far higher revolutions than a similarly configured engine with traditional spring-valve heads.

In the 1960s and -70s Ducati produced a wide range of small two-stroke bikes, mainly sub-100 cc capacities. Large quantities of some models were exported to the U.S.

Ducati had completed testing the Desmosedici GP7, Ducati's 2007 MotoGP race bike. The GP7 complies with new regulations requiring a maximum of 800 cc (as compared with the 989 cc of the GP6). The GP7 is currently known to be the most powerful 800 cc MotoGP race bike, as illustrated in the 2007 Qatar GP, where the four Ducatis produced, by a considerable margin, the highest top speeds of the entire MotoGP grid.

When Ducati re-joined MotoGP in 2003, MotoGP had changed its rules to allow four-stroke 990 cc engines to race. At the time Ducati was the fastest bike. In 2007, MotoGP reduced the engine size to 800 cc, and Ducati continued to be the fastest with a bike that was markedly quicker than its rivals as was displayed by Casey Stoner on tracks with long straights.

Ducati also supplies customer bikes to the Alice Team, with Mika Kallio and Niccolò Canepa riding for the team in 2009.

For 2009, Ducati will race a homologated version of the 1198. The FIM, the sanctioning body for the Superbike World Championship, has raised the displacement limit for two cylinder engines to 1,200 cc. In 2007, Ducati raced their 999F07 which is a homologated racing version of the 999R because maximum displacement for two cylinder engines was limited to 1,000 cc.

The company has won thirteen rider's world championships since the championship's inception in 1988. It has been argued that Ducati has amassed more wins than any other manufacturer because the rules are deliberately set to favour their bikes through manufacturer lobbying; this, of course, is a matter of dispute. In 2006, Troy Bayliss' championship winning 999R was quoted to have 10 to 15 HP less than the Japanese four cylinder rivals, despite the fact that the Ducati L-Twin had less limitations imposed for tuning its engine.

The British Superbike Championship has been won by Ducati riders on eight occasions and entered since 1988:

In the AMA Superbike Championship, Ducati has had its share of success, with Doug Polen winning the title in 1993 and Troy Corser the following year in 1994. Ducati has entered a bike in every AMA Superbike season since 1986, but withdrew from the series after the 2006 season.