Benelli is an Italian Motorcycle manufacturer. The company also manufactures shotguns, although this part of the business is now a separate company from the motorcycle side.

The 175 cc Benelli Racing Team was in the thirties an almost unbeatable force. Picture of Raffaele Alberti and to the right Amilcare Rossetti

Benelli was established in Pesaro, Italy, in 1911. Teresa Benelli, a widow, sank all of the family capital into the business, in the hope that it would offer stable work for her six sons: Giuseppe, Giovanni, Francesco, Filippo, Domenico and Antonio or "Tonino".

In the beginning, it was just the "Benelli Garage" which only repaired cars and motorcycles, but was already able to produce all of the spare parts needed for repairs.

In 1920 the company built its first complete engine in-house, a single-cylinder two-stroke 75 cc model, immediately adapted to a bicycle frame. A year later in 1921, Benelli built its first motorcycle with its OWN engine which had by then become a 98 cc model.

Two years after that, using a version specially designed for competitions, Tonino the "terrible" took to the track. He displayed an extraordinary natural talent as a rider and embarked on a very successful career which confirmed the company's exceptional capacity for development and production.

Unfortunately, a bad crash during a race in 1932 cut short his brilliant career and on 27 September 1937 Tonino died following a "silly" road accident.

As World war 2 loomed, the Benelli company debuted their 4 cylinder supercharged 250cc racing bike. This was intended to compete in the 1940 season, building on Benelli's success in the 1939 Isle of Man TT. With the start of the war, the Benelli 4 was limited to competition in a handfull of Italian domestic races.

Wartime destruction caused Benelli to remain out of production until 1949. When production was resumed, designs were still largely based on those of the pre-war period. During 1949, Guiseppe Benelli left the family concern to found the Motobi marque.

By 1951, Benelli was offering a range consisting of 98 and 125cc lightweights (the Leoncino or lion cub) and 350 and 500cc singles. The leoncino was available in both 2 stroke and 4 stroke formats. These lightweight models were immensely successful in post-war Italy due to a desire for cheap transport. Similar models were offered by Moto Guzzi, Ducati and Laverda and they same economic conditions lead to the growth in popularity of Vespa and Lambretta scooters.

In 1962, Benelli and Motobi produced around 300 motorcycles per day and had 550 employees.

Tonino Benelli was the undisputed protagonist of the early racing successes. With an extraordinary natural talent for riding, he began a rewarding career that confirmed his exceptional technical skill and innovation within the company. In the saddle of a Benelli 175, Tonino won the title of Italian Champion in 1927, 1928 and 1930 riding the SOHC version, and in 1931 with the DOHC version. The numerous victories in the European World Championship were a prelude to one of the most sought after successes of all motorcycle producers: the Isle of Man Tourist Trophy, at that time the most important race in the world.

In 1939, Ted Mellors was victorious, racing in the saddle of the Benelli 250. In 1950, Dario Ambrosini also won the 1950 Isle of Man TT, repeating Mellors’ success and consecrating his title by winning both the Italian and the World Championships.

In the 1960s two extraordinary riders competed in the races: Tarquinio Provini, who won the Italian Championship with the 250 in 1965 and Renzo Pasolini who won the Championship with the 250 as well as the 350 in 1968 and 1969. In 1969, the enormous effort invested in competition was rewarded with the 250 world title thanks to Kel Carruthers, who also again won the Tourist Trophy in the same year. It would also mark the last world championship for a four-stroke motorcycle until the advent of the modern MotoGP era in 2003. Many of the most famous riders in the history of motorcycling raced with Benelli bikes, from Mike Hailwood to Jarno Saarinen. 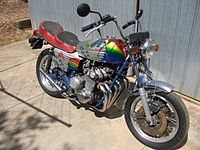 Towards the end of the 1960s, the arrival of Japanese manufacturers caused a crisis in the European motorcycle industry. The original Benelli company was heavily involved in the American motorcycle market, selling motorcycles under 350cc through Montgomery Ward. The advent of competition from Japan led to Benelli products (still largely of single cylinder pushrod design) losing popularity as they were perceived as old-fashioned in comparison to Hondas of the era which sported overhead cam engines with electric starters, in much the same way as the British Motorcycle industry was affected in the larger capacity sector.

In 1973 Benelli was acquired by Argentinian industrialist Alejandro de Tomaso together with its competitor Moto Guzzi which lead to the development of new models featuring multi-cylinder engines, such as the "350 Quattro" and the "500 Quattro", and of the incredible "750 Sei" powered by a huge six-cylinder in-line engine, which put the firm briefly ahead of the Japanese competition. Although technically advanced, Benelli motorcycles of the 1980s were plagued by problems, and the production was finally stopped in 1988 when the company was merged into Moto Guzzi to create "Guzzi Benelli Moto S.p.A.", and the production plants in Pesaro were sold.

In 1989 there was hope of a revival with the backing of Pesaro-based manufacturer Giancarlo Selci. But the time still wasn't right for a real comeback.

In 1995 revival of the brand with the glorious history became a real possibility when Andrea Merloni took charge. Results were fast in coming with the launch of the Tornado 900 Tre super sport bike in 2002 and the current launch of the TNT, the roadster. Former Australian Superbike champion Peter Goddard signed with Benelli in 2001 to accelerate the development of the Tornado Tre 900.

Benelli is now part of motor Group Qianjiang, which is a corporation located in southeast China at Wenling. Benelli Q.J. is located in Pesaro where the previous proprietors based the facilities, keeping the whole workforce previously working at Benelli s.p.a.