The Maserati Quattroporte is a luxury four-door sedan made by Maserati of Italy. There have been five generations of the car, each separated by a period of roughly five years.

In the early 1960s, Maserati's reputation was at a high. With growing sales, Prince Karim Aga Khan ordered a special Maserati 5000 WP, chassis no. 103,060, designed by Pietro Frua. The following year, Maserati showed the first-generation Quattroporte of 1963, which bore a striking resemblance to the earlier drawing.

Also designed by Frua, the 1963 'Tipo 107' Quattroporte (Italian for 'four doors') joined two other notable grand tourers, the Facel Vega and the Lagonda Rapide, which could comfortably do 200 km/h on the new motorways of Europe. However, the Quattroporte could be said to have been the first car specifically designed for this purpose.

In 1971, Karim Aga Khan ordered another special on the Maserati Indy platform, given the reference code AM 121.

In 1974, at the Turin Show, Maserati presented its Quattroporte II (AM 123) on a Citroën SM chassis, since Citroën had purchased the Italian company. It had an angular Bertone body, fashionable at the time, and was the only Maserati with a hydropneumatic suspension and front wheel drive. However, the 1973 oil crisis had intervened and demand for such cars slowed. Furthermore, the front wheel drive layout and modest V6 powerplant from the Merak (offering less that 200 horsepower) didn't attract many customers. Maserati made 13 Quattroporte IIs. Six of them originally were pre-production models and the other seven were built to order between 1975 and 1978.

Considered a "business man's Maserati," the Quattroporte III was launched by newly empowered Maserati chief Alejandro de Tomaso and his design staff in 1976. This was a rear wheel drive car, powered by a large V8 engine. It was important to de Tomaso that there was an Italian vehicle to compete with vehicles like the recently launched Mercedes-Benz 450SEL 6.9..

The production figures for the Quattroporte are as follows:

The Quattroporte III marked the last of the hand-built Italian cars for specialized markets. All exterior joints and seams were filled to give a seamless appearance.

In 1976, Giorgetto Giugiaro presented two ItalDesign show cars on Maserati platforms, called the Medici I and Medici II. The latter in particular featured hallmarks which would make it into the production of the third-generation Quattroporte. By the end of 1976, Maserati announced the Quattroporte III (Tipo AM 330), which took much from the Medici show cars, based on Maserati's Kyalami coupé, which in turn was based on the De Tomaso Longchamp.

In 1976 the Quattroporte III was launched as "4porte" with a 4.2 L engine producing 251 hp (SAE) (187 kW), later 238 hp (SAE) (177 kW). Also available was a 4.9 liter V8 (280 bhp @ 5800 rpm). One distinguishing characteristic of the vehicle was its lavish interior. The car was designed by Giorgetto Giugiaro of coachbuilder ItalDesign. In 1979 the Quattroporte got its true name back and was built with the 4.2 L and a new 4.9 L engine 278 hp (SAE) (207 kW). The latter initially had a three-speed Borg–Warner automatic transmission, soon replaced by a Chrysler Torqueflite gearbox. The smaller engine was phased out in 1981.

In all, 2,141 Quattroporte IIIs were produced, one of them for Italian presidential use. Production ceased in 1990.

The 4-door Biturbos such as the original 425 weren't aimed at the same customers like the big Quattroporte I, II and III.

All 4-door Biturbos carry the figure "4" in their model name and are based on the 2-door Biturbos with an extended wheelbase. They were available in various "tastes": 11 different models each equipped with a different version of the V6 Biturbo engine (2.0 L, 2.5 L and 2.8 L). Besides being fairly successful as a general model some versions are extremely rare, e.g. the 4.18v was built 77 times and sold solely in Italy. The 4-door Biturbos were the only sedans available from Maserati between 1990 and 1994 and in several markets even between 1986 and 1994 (where the Royale wasn't sold due to emission problems).

The 430 4v was the last version of the 4-door Biturbos. The technical backbone (engine, drivetrain, suspension, AC etc.), general layout and interior design were used for the Quattroporte IV. 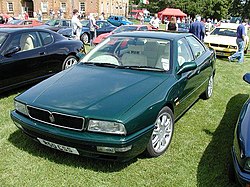 At the height of Fiat's styling prowess, Maserati was confident to be more adventurous with Quattroporte IV from 1994. Designed by Marcello Gandini, who had penned the Lamborghini Countach, the new car was smaller, very aerodynamic (0.31 cd), and featured Gandini's trademark angular rear wheel arch.

When Ferrari took over Maserati, it introduced a Quattroporte Evoluzione in 1998. This improved model saw the famous oval Maserati clock disappear from the interior. Production stopped in 2000.

The 47% front-53% rear weight distribution allows the large sedan to have very nimble handling. This weight distribution is achieved by setting the engine further back in the chassis behind the front axle to shift the load back towards the cabin, and the adoption of the Transaxle layout which sees the gearbox rear-mounted in unit with the differential. The transaxle architecture is normally reserved for high performance sports cars and is the first time applied to a luxury sedan. The Quattroporte's weight distribution maximizes traction and thrust during acceleration so that the car remains exceptionally stable and well balanced at all times.

A full automatic transmission will be added in 2007 for the United States market.

The Sport GT version of the Quattroporte was introduced at the Frankfurt Motor Show in September, 2005. It features a reworked transmission, 20 inch wheels, suspension modifications, and special interior and exterior accents including a mesh grille. It is priced at USD$118,000.

The Executive GT version of the Quattroporte was introduced at the North American International Auto Show in January, 2006. It is based on a special Neiman-Marcus version, with 19 inch ball-polished wheels and an Alcantara suede interior roof lining. Other features include chrome side and front grills and a leather-trimmed steering wheel.

Included standard on the Executive GT version is a Maserati comfort pack with ventilated, massaging front and rear seats, retractable wood rear tables, and curtain shades on the rear windows. The Quattroporte Executive GT is priced at USD$123,000.