The Fiat 850 was a small rear-engined rear wheel drive car in the tradition of the Renault Dauphine and was produced between 1964 and 1973.

Its technical design was an evolution of the very successful Fiat 600. The internal name for the Fiat 600 development project was "Project 100" and consequently, the internal Fiat codename for the 850 project was 100G (G for the Italian word Grande - big). The engine of the 850 was based on that of the Fiat 600, but had its capacity increased to 843 cm³. The 850 came in two versions: "normale" (standard) with 34 HP and "super" with 37 HP. The maximum speed was approximately 125 km/h. While it was not a large step forward in technical development, it possessed a certain charm with its large rolling eyes and its short tail, in which the engine sat. 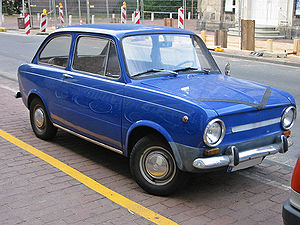 Front view of the sedan version

Rear view of the sedan version

The 850 family included several body styles with similar technical components underneath and derived from the 600 Multipla.

The Coupé was introduced for the first time 1965 on the Geneva Motor Show and had the original 843 cm³ engine tuned to produce 47 HP. The maximum speed at that time was 135 km/h.

At the same time as the Coupé also the convertible sporty two-seater Spider was presented, again with the original 843 cm³ engine tuned to produce 49 HP which allowed it to reach a top speed of 145 km/h . It was sketched by the designstudio Bertone and was also completely built by them. The folding roof section made of fabric could be stowed away completely under a rear flap.

note: The Sedan, Coupé, and Spider were marketed in the United States at that time with a reduced capacity 817 cm³ engine, in order to meet emissions regulations.

Revised version of the 850 sedan, launched in 1968. It shared the 47 HP engine of 850 Coupé, and offered front disc brakes, sport steering wheel and improved trim. With a 25 percent increase in power, plus disc brakes nestled behind 13" wheels, it was a "sport sedan" in the vein of the BMW 2002, albeit on a smaller scale.

In order to separate the sportier variants Coupé and Spider from the basic version, apart from the increase of engine performance, the equipment was also extended and adapted to the higher expectations. Both received sport seats, a sport steering wheel and round speedometer; Spider even received a completely rearranged instrument panel. The previous drum brakes were replaced by better disc brakes.

1968 Fiat revised the success models Coupé and Spider again and gave them an even stronger engine with 903 cm³ and 52 HP. They were now called Sport Spider and Sport Coupé. They are today considered classics.

Besides there was a transporter model as a successor of the Fiat 600 Multipla, which was later renamed to 900T and likewise received the larger capacity of 903 cm³.

The production of the Coupés was stopped in 1971, of the sedan in 1972 and of the Spiders in 1973, after alltogether nearly 2.3 million models were sold world-wide. Under the name SEAT 850, it was however further produced for some years in Spain, also in a four-door variant. As a successor the Fiat 127 was brought to the market in 1971 which combined the 903cc push-rod OHV engine with the FIAT 128 transmission and suspension components in a fashionable fast- and later hatch-back 2-door sedan.

The Fiat 850 was also produced under the name Pirin-Fiat in Lovech, Bulgaria, on the basis of complete knockdown (CKD) kits between 1967 and 1971.