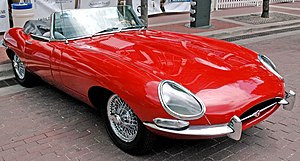 A sports car is a type of automobile designed primarily for performance driving while not being a rally orientated car.

While opinions differ as to the exact definition, most sports cars have two seats and two doors and are designed to provide excellent handling, acceleration, and good looks. A sports car can be described as a car whose dominant design consideration is driving performance. A sports car's main emphasis is on performance by superior road holding, braking, maneuverability, low weight and power rather than comfort, passenger space, and economy.

Sports cars can be luxuriousTemplate:Fact or spartan, but driving performance is key. Drivers regard brand name and the subsequent racing reputation and history (Ferrari, Porsche, Lotus, etc.) as an important indication of sporting quality, but brands such as Lamborghini which do not race or build cars exclusively for racing are also highly regarded.

A car may be sporting without being a sports car. Performance modifications of regular cars, such as sport compacts, sports sedans, muscle cars, hot hatches and the like do not generally fall in the pure sports car territory, but share common sports car traits. Often, performance cars of all configurations are grouped under the general term Sports and GT cars or occasionally performance cars

A large, powerful engine is not required for a sports car, even though many possess them. Most early British sports cars lacked a powerful engine and did not accelerate as quickly as contemporary American muscle cars, but were known for having exceptional handling characteristics due to their combination of light weight, carefully engineered/balanced chassis, and innovative suspension designs. Lotus is often cited as an example of this approach today. On tight, twisting roads, such a car usually has higher effective performance than a heavier, more powerful car with less cornering ability.

File:63 vette.jpg
The Chevrolet Corvette (shown is a 1963 model) is commonly referred to as "America's Sports Car". A cross between a sports car and a muscle car.

Due to certain restrictions in the North American market usually involving safety regulations, many sports cars are not available for sale or use in the United States and Canada. In Britain, Europe and the Arab market (e.g. UAE), a more flexible attitude towards small-volume specialist manufacturers has allowed companies like TVR, Noble, Pagani, etc. to succeed.

The layout of drive train and engine influences the handling characteristics of a car and is the focus of more attention in the design of a sports car.

The front-engine, rear wheel drive layout (FR layout for short) is common among sports cars of any era. This form has survived longer in sports cars than in the mainstream, due to the unique handling characteristics, cost, and packaging considerations. Current examples include the BMW M3, Mazda Miata and the Ford Mustang.

In search of improved handling and weight distribution, other formats have been tried. The MR layout is commonly found only in sports cars—the engine is mounted towards the centre of the chassis, which is close behind the driver, and powers the rear wheels only. This layout is preferred by high performance sports car and supercar manufacturers, such as Ferrari and Lamborghini. Many modern cars also use a front-mid layout "FM", where the engine sits between the front axle and the firewall.

Porsche is one of the few remaining manufacturers which uses the rear-engine, rear wheel drive layout (RR layout), a rear engine driving the rear wheels. The weight distribution across the wheels in a Porsche 911 provides excellent traction, but cannot be seen as ideal as the weight of the engine is not between the two axles. This causes poor vehicle balance and many early Porsches suffered from twitchy handling. However, Porsche have continuously refined the design and, in the recent years, combined their modifications with electronic driving aids like computerized traction and stability control that do much to counteract the inherent characteristics of the design.

Some sport cars have used use a front-engine, front wheel drive layout (FF). Examples include Lotus Elan M100, Fiat Coupé, Fiat Barchetta, Saab Sonett and many Berkeley cars... The layout has some advantages in small, light sports cars since they don't have the extra weight of propshaft and differential, and not having the driveshaft tunnel or rear differential taking up space. But due to its conservative effect on handling, it is not typical in higher-performance models. However, the FF layout is quite common in sport compacts and hot hatches, like the Honda Civic Si and Type-R, the Volkswagen Golf GTi and the Peugeot 205 GTi.

One option for transferring the power from the engine to the car's wheels is all wheel drive (AWD). Examples include sports cars manufactured by Porsche and Lamborghini as well as the supercar Bugatti Veyron.

Some sports cars have small back seats that are really only suitable for luggage or small children. Such a configuration is often referred to as a 2+2 (two full seats + two "occasional" seats). Often these seats are only included to lower insurance premiums.

Over the years, some manufacturers of sports cars have sought to increase the practicality of their vehicles by increasing the seating room.

One method is to place the driver's seat in the center of the car which allows two full-sized passenger seats on each side and slightly behind the driver. The arrangement was originally considered for the Lamborghini Miura but abandoned as impractical because of the difficulty for the driver to enter/exit the vehicle. McLaren used the design in their supercar F1.

Another British manufacturer, TVR, took a different approach in their Cerbera model. The interior was designed in such a way that the dashboard on the passenger side swept toward the front of the car which allowed the passenger to sit farther forward than the driver. This gave the rear seat passenger extra room and made the arrangement suitable for three adult passengers and one child seated behind the driver. The arrangement has been referred to by the company as a 3+1. Some Matra sports cars even had three seats squeezed next to each other.

Well known specialist brands or marques, modern and classic, are:

Almost all major car manufacturers also make some form of high performance car, sometimes very successfully such as Ford with the GT, Mazda with the MX-5/Miata, RX-7/RX-8, BMW M Cars, Chevrolet with the Corvette, Honda with its S2000, and Nissan with the Z-car.

Many major manufacturers have a sports car that serves as the 'flagship' image car of the company. Also known as a halo car For example,