This article is about a type of piston engine. For internal combustion engines which do not use pistons, see pistonless rotary engine and Wankel engine 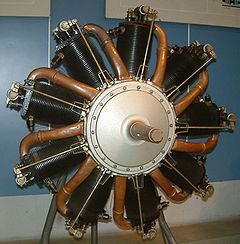 Le Rhône 9C, a typical rotary of WWI. The copper pipes carry the fuel-air mixture from the crankcase to the cylinder heads.

The rotary engine was an early type of internal combustion aircraft engine, used mostly in the years shortly before and during World War I. It was also used in a few motorcycles and cars.

The effect of rotating such a large mass was an inherent large gyroscopic flywheel effect, smoothing out the power and reducing vibration. Vibration had been such a serious problem on other conventional piston engine designs that heavy flywheels had to be added. Because the cylinders themselves functioned as a flywheel, rotary piston engines typically had a power-to-weight ratio advantage over more conventional engines.

Most rotary engines were arranged with the cylinders pointed outwards from a single crankshaft, in the same general form as a radial, but there were also rotary boxer engines and even one cylinder rotaries.

Lawrence Hargrave first developed a rotary engine in 1889 using compressed air, intending for it to be used in powered flight. Weight of materials and lack of quality machining prevented it becoming an effective power unit.[1]

The first effective rotaries were built by Stephen Balzer, who was interested in the design for two main reasons:

Balzer's first designs were ready for use in 1899, at which time they were the most advanced in the world. Other aircraft engines would not catch up in performance for a decade. He then became involved in Langley's Aerodrome attempts, which bankrupted him while he tried to make much larger versions.

The next major advance in the design was Louis and Laurent Seguin's Gnôme series from 1908. This design was developed from a German single-cylinder stationary engine intended for light industrial use, the Gnom, which the brothers were producing under license from Motorenfabrik Oberursel. They essentially took several Gnom cylinders and combined them on a common shaft to produce a seven-cylinder rotary, the Gnôme Omega No.1 still exists and is in the collection of the Smithsonian's National Air and Space Museum. A production version of the Omega then soon reached the aviation market, still as a 7-cylinder 50 hp (37 kW), which soon reached 80 hp (60 kW), and eventually 110 hp (80 kW). The engine was at this later 80 hp (60 kW) standard when World War I started, as the Gnôme Lambda, and the Gnome quickly found itself being used in a large number of aircraft designs. It was so good that it was licensed by a number of companies, including the German Oberursel firm who designed the original Gnom engine. Oberursel was later purchased by Fokker, whose Gnôme Lambda copy was known as the Oberursel U.I. It was not at all uncommon for French Gnômes to meet German versions in combat.

The Gnôme (and its copies) had a number of features that made it unique, even among the rotaries. Notably, the fuel was mixed and sprayed into the center of the engine through a hollow crankshaft, and then into the cylinders through the piston itself, a single valve on the top of the piston let the mixture in when opened. The valves were counter balanced so that only a small force was needed to open them, and releasing the force closed the valve without any springs. The center of the engine is normally where the oil would be, and the fuel would wash it away. To fix this, the oil was mixed in liberal quantities with the fuel, and the engine spewed smoke due to burning oil. Castor oil was the lubricant of choice, its gum-forming tendency being irrelevant in a total-loss lubrication system. An unfortunate side-effect was that Sopwith Camel pilots inhaled and swallowed a considerable amount of the oil during flight, leading to persistent diarrhoea. Finally, the Gnôme had no throttle or carburetor. Since the fuel was being sprayed into the spinning engine, the motion alone was enough to mix the fuel fairly well. Of course with no throttle, the engine was either on or off, so something as simple as reducing power for landing required the pilot to cut the ignition. "Blipping" the engine on and off gave the characteristic sputtering sound as though the engine was nearly stalling, though it did not stall as quickly as conventional engines due to its great rotational inertia.

Throughout the early period of the war, the power-to-weight ratio of the rotaries remained ahead of that of their competition. They were used almost universally in fighter aircraft, while traditional water cooled designs were used on larger aircraft. The engines had a number of disadvantages, notably very poor fuel consumption, partially because the engine was always "full throttle", and also because the valve timing was often less than ideal. The rotating mass of the engine made it, in effect, a large gyroscope. This could result in tricky handling. The Sopwith Camel, for example, was known to turn very nimbly to the right, but rather sluggishly to the left. Nevertheless, rotaries maintained their edge through a series of small upgrades, and many newer designs continued to use them.

A few of the nine cylinder rotaries managed to accomplish a partially throttleable functionality by switching off either three or six cylinders (or other numbers of them), instead of all nine of them, when the "coupe switch" was depressed to cut the spark. It is believed that both German and Allied WW I rotaries had this ability, as some surviving documentation regarding the Fokker Eindecker shows a rotary selector switch to cut out a selected number of cylinders on its rotary engine. The Gnôme Monosoupape series of engines is known to have this sort of switching available to it, and has been demonstrated long after WW I by a 160 hp Monosoupape powered reproduction Sopwith Camel at Old Rhinebeck Aerodrome while in flight in the 1990s.

As the war progressed, aircraft designers demanded ever-increasing amounts of power. Inline engines were able to meet this demand by improving their RPM, as more "bangs per minute" meant more power delivered. Improvements in valve timing, ignition systems and lighter materials made these higher RPM possible, and by the end of the war the average engine had increased from 1,200 RPM to 2,000. However the rotary was not able to use the same "trick," due to the drag of the cylinders through the air as they spun. For instance, if an early-war model of 1,200 RPM increased to only 1,400, the drag on the cylinders increased 36%, as air drag increases with the square of velocity. At lower speeds the drag could simply be ignored, but as speeds increased the rotary was putting more and more power into spinning the engine, and less into spinning the propeller. Template:Verification needed

One clever attempt to rescue the design was made by Siemens AG. The crankcase and cylinders spun counterclockwise at 900 RPM while the crankshaft spun clockwise at the same speed. This was achieved by the use of bevel gearing at the rear of the crankcase, resulting in the Siemens-Halske Sh.III, running at 1800 RPM with little net torque. It was also apparently the only rotary engine to use a regular style of throttleable carburetor, just as in an in-line engine. Used on the Siemens-Schuckert D.IV fighter, the new engine created what is considered by many to be the best aircraft of the war.

By the end of the war only a single new rotary powered aircraft was designed, Fokker's own D.VIII, designed solely to provide some use for their Oberursel factory's backlog of now-useless Ur.II 110 hp engines, themselves clones of the Le Rhône 9J rotary. When the war ended, the rotary disappeared almost instantly, with WWI engines being used for training for a short time until their poor fuel economy drove the users to newer engines.

Use in cars and motorcycles

In 1904, the Barry engine was built in Wales, a rotating 2 cylinder boxer engine inside a motorcycle frame, weighing 6.5 kg. In the 1940s Cyril Pullin developed the Powerwheel, a wheel with rotating one cylinder engine, clutch and drum brake inside the hub but it never went into serial production.

Cars with rotary engines were built (among others) by American companies Adams-Farwell, Bailey, Balzer and Intrepid.

Besides the configuration described in this article with cylinders moving around a fixed crankshaft, several other very different engine designs can also be described as rotary engines. The most notable pistonless rotary engine, the Wankel rotary engine has also been used in cars (notably by Mazda, such as in the RX-7 and RX-8), as well as in some experimental aviation applications.

Difference between Rotary and Radial engines

In aviation, planes that use Radial engines have their propellars connected in one way or another to the crankshaft while the cylinders and crankcase are mounted on the airframe. Planes that use Rotary engines however, have their propellars connected to the cylinders and crankcase while the "crankshaft" is mounted onto the airframe.