The term Deltic (meaning in the form of the Greek letter Delta) is used to refer to both the opposed-piston high-speed diesel engine designed and produced by D Napier & Son, and the locomotives produced by English Electric using these engines, including their demonstrator locomotive named DELTIC and the production version for British Railways, who designated these as Class 55.

An animated schematic of a Deltic engine. The inlet is coloured green and the outlet purple. Notice the bottom shaft contra-rotating with respect to the other two; the lag between the exhaust and inlet ports opening; and that ignition occurs when the pistons are not at equal positions in the cylinder.

The Deltic story began in 1943 when the British Admiralty set up a committee to develop a high-power, lightweight diesel engine for Motor Torpedo Boat. Hitherto in the Royal Navy, such boats had been driven by petrol engines but this fuel is highly flammable, making them vulnerable to fire, and at a disadvantage compared to the German diesel-powered E-boats.

Until this time, diesel engines had poor power-to-weight ratio and low speed. Before the war, Napier had been working on aviation diesel designs (licensed versions of the Junkers Jumo 204) and the Admiralty felt these would be a reasonable starting point for the larger design they required.

The original Napier Culverin was an opposed piston design. Instead of each cylinder having a single piston and being closed at one end with a cylinder head, the elongated cylinder contained two pistons moving in opposite directions towards the centre. This negates the need for a heavy cylinder head. This led to a rather "flat" engine, intended to be buried in the wings of large aircraft. The Admiralty required a much more powerful engine, so for the added power Napier took three of their original Culverins and "bolted them together".

The result was an inverted triangle, the cylinder banks forming the sides, and tipped by three crankshafts, one at each corner. The crankshafts were connected with phasing gears to drive one output shaft. Various models of Deltic engine could be produced with varying numbers of cylinders, though nine and eighteen cylinders were the most common, having three and six cylinders per bank respectively. In 1946, the Admiralty placed a contract with the English Electric Company, parent of Napier, to develop this engine.

One of the interesting features of this engine was the clever way the crankshaft phasing was arranged to allow for exhaust port lead and inlet port lag. These engines are called 'uniflow' designs because the flow of gas into and out of the cylinder is one way, assisted by mild supercharging to improve cylinder exhaust scavenging. 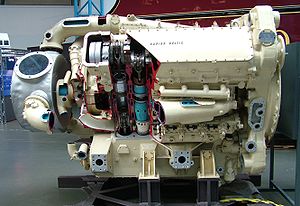 Earlier attempts at designing such an engine failed because of the difficulty in arranging the pistons to move in the correct manner, for all three cylinders in one delta. Napier solved this problem by gearing the crankshafts so that one of them rotated in the opposite direction to the other two.

In an opposed piston design with no inlet or exhaust valves, and no ability to vary the port positions, the Deltic design arranged each crankshaft to connect two adjacent pistons operating in different cylinders in the same plane, using forked connecting rods, one an 'inlet' piston used to open and close the inlet port, and the other an 'exhaust' piston in the adjacent cylinder to open and close the exhaust port.

Crankshaft connecting-rod journals were arranged so that each cylinder's exhaust piston 'led' its inlet piston by 20 degrees of crankshaft rotation. This allowed the exhaust port to be opened well before the inlet port, and allowed the inlet port to be closed after the exhaust port, which led to both good scavenging of exhaust gas, and good volumetric efficiency for the fresh air charge. It suffered from the disadvantage that the two pistons contributed unequally to power output.

Development began in 1947 and the first Deltic unit was produced in 1950. By January 1952 six engines were available, enough for full development and endurance trials. An ex-German E-Boat, powered by three Mercedes-Benz diesel engines, was selected for these trials, since its power units were of approximately equal power to the new 18 cylinder Deltic engines. Two of the three Mercedes-Benz engines were replaced with Napier Deltics, the compactness of the Deltic being graphically illustrated: they were half the size of the original engines. The Deltic weighed one fifth of its contemporaries of equivalent power.

Proving successful, Deltic diesel engines became a common powerplant in small and fast naval craft. The Royal Navy used them first in the Dark-class fast attack craft. Subsequently they were used in a number of other smaller attack craft. The low magnetic signature lent itself to use in mine countermeasure vessels and the Deltic was selected to power the Ton-class minesweeper. The Deltic engine is still in service in the Hunt-class. These versions are de-rated to reduce engine stress.

Deltic diesels served in MTBs and PT Boats built for other navies. Particularly notable Was the Norwegian Tjeld or Nasty class, which were also sold to Germany, Greece, and the United States Navy. Nasty-class boats served in the Vietnam War, largely for covert operations.

While the Deltic engine was successful and very powerful for its size and weight, it was a high-strung unit, requiring much maintenance. This led to a policy of unit replacement rather than repair in place. Deltic engines were easily removed upon breakdown, generally being sent back to the manufacturer for repair.

A turbo-compound variant of the Deltic was planned. This would have inserted the turbine stage from a Rolls-Royce Nene turbojet into the centre of the delta. The engine acted as the gas generator, driving the turbine with the exhaust gases, recycling some energy that would otherwise have been lost. Such an engine was hoped to produce 6,000 horsepower.