Renault Mégane Scénic, the first car to be marketed as a compact MPV 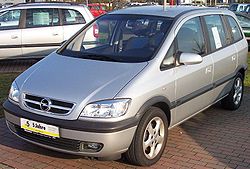 Opel Zafira, an a MPV with seven seats

A compact MPV is a car classification used in Europe to describe multi-purpose vehicle versions of small family cars (sometimes also referred to as "compact cars"), fitting between the mini MPV and large MPV classifications. The first vehicle to be described by that name was Renault Mégane Scénic, launched in 1996. Some later models include Opel Zafira, Citroën Xsara Picasso, Ford Focus C-Max, Volkswagen Touran and Fiat Multipla. In few years, compact MPVs outsold estates and saloons in many countries.Template:Fact

Most of compact MPVs have better "flexibility" than other body styles: for example, seats may be individually folded or even removed. Due to the multi-purpose architecture, the bonnet is shorter and the passengers sit more upright than in regular cars, providing for a roomier interior.

Compact MPVs can be classified by their number of seats. Models with five seats are usually between 4.20 m and 4.35 m long, while six- or seven-seaters range from 4.30 m and 4.60 m. Some compact MPVs referred to as six-seaters have three seats both in the front and rear row - examples are the Fiat Multipla and the Honda FR-V. Five- and seven-seaters have a more traditional configuration - the first and (if present) third rows with two seats and the middle row with three. The two rear seats are usually smaller than the others, enough for children or for short distances.

Some manufacturers offer the third row seating as an option, and a few offer two distinct models, one of them strictly 5-seater, and the other with either fixed or removable additional sixth and seventh seat - example include Volkswagen Golf Plus/Touran or Renault Scénic/Grand Scénic.

The future of compact MPVs

Template:Speculation Some compact MPVs and compact SUVs are becoming closer together regarding design and styling.Template:Fact Some European manufacturers are considering to release SUV versions of their compact MPVs, like the Volkswagen Tiguan and other models. [1] These two car segments are blurring, as MPVs are becoming sportier and less boxy (SEAT Altea), while SUVs drop off-road capabilities and adopt MPV-like architecture (Mitsubishi Outlander).Template:Fact