A bicycle with a hub gear. 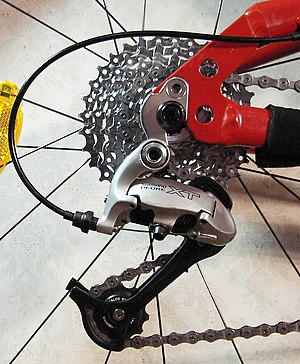 On a bicycle, power is transmitted from the rider's legs to the rear wheel via the pedals, crankset, chain or shaft, and rear hub. A cyclist's legs produce power optimally within a narrow pedalling speed range. Gearing is optimized to use this narrow range as best as possible. As in other types of transmissions, the gear ratio is closely related to the mechanical advantage of the drivetrain of the bicycle. On single-speed bicycles and multi-speed bicycles using derailleur gears, the gear ratio is the ratio of the number of teeth on the chainring of the crankset and the rear cog or sprocket. or the ratio of bevel gears on a shaft-driven bicycle. In the case of a derailleur-equipped bicycle, this sprocket is one of several comprising the cassette. On hub gears the ratio is determined by the internal planetary gears within the hub.

For the same speed, or more accurately, power output at the rear wheel, a lower gear (larger mechanical advantage) will require the rider to pedal at a faster cadence, but with less force. Conversely, a higher gear (smaller mechanical advantage) allows a higher speed for a given cadence, but requiring greater force. Different cyclists may have different preferences for cadence and pedalling force. Prolonged exertion of too much force in too high a gear at too low a speed can increase the chance of knee damage.

The gearing supplied by the manufacturer on a new bicycle is selected to be useful to the majority of people. Some cyclists choose to fine-tune the gearing to better suit their strength, level of fitness, and expected usage. When buying from specialist cycle shops, it may be less expensive to get the gears altered before delivery rather than at some later date. Modern crankset chainrings can be swapped out, as can cassettes.

By contrast, car engines deliver power over a much larger range of speeds than do cyclist's legs, so relative differences of 30% or more are common for car gearboxes.

Note that with derailleur gears the advertised number of gears may be somewhat misleading. For example, a combination of 3 chainrings and an 8-cog cassette does not result in 24 usable gears. Instead it provides 3 overlapping ranges of 7, 8, and 7 gears (the extremes big-big and little-little should not be used - diagonal chain angles reduce efficiency and cause excessive chain wear). Due to the overlap, there may well be some duplicates or near-duplicates, so that there might only be 16 or 18 distinct gears. It may not be feasible to use these distinct gears in strict low-high sequence anyway due to the complicated shifting patterns involved (e.g. simultaneous double or triple shift on the rear derailleur and a single shift on the front derailleur). In the worst case there could be only 10 distinct gears, if the percentage step between chainrings is the same as the step between cogs.

Internal hub geared bikes typically have a more restricted gear range than comparable derailleur-equipped bikes, and have fewer ratios within that range. On the other hand, a driveshaft system allows greater ground clearance, and the driveshaft and gearing are enclosed, which protects moving parts from the elements. Moreover, there is no danger of clothing or fingers being drawn into the chain and sprockets.

Early bicycles and their predecessors were directly driven by the feet. The penny-farthing used a large driven front wheel to increase the top speed, the distance covered per revolution depending only on the wheel size. The safety bicycle introduced driving the rear wheel via a chain, allowing faster travel on a smaller wheel and introducing the concept of bicycle gearing. Later improvements included the freewheel and shifter.

Some bicycles have used a double-sided rear wheel, with different-sized sprockets on each side. To change gears, the rider would stop and dismount, remove the rear wheel and reinstall it in the reverse direction. One example of this type of bicycle is in the Science Museum (London, UK).

Derailleur systems were first developed in the late 19th century, but the modern cable-operated parallelogram derailleur was invented in the 1950s.

External gearing utilizes derailleurs, which can be placed on both the front chainring and on the rear cluster or cassette, to push the chain to either side, derailing it from one sprocket to a neighboring sprocket. The sides of the sprockets may be sculpted to help catch the chain, pulling it up onto their teeth to change gears. There may be 1 to 3 chainrings, and 5 to 10 sprockets on the cassette or freewheel. Derailleur type mechanisms of a typical mid-range product (of the sort used by serious amateurs) achieve between 88% and 99% mechanical efficiency at 100W. In derailleur mechanisms the highest efficiency is achieved by the larger cogs. Efficiency generally decreases with smaller cog and chainwheel sizes.

Derailleur efficiency is also compromised with cross-chaining, or running large-ring to large-cog or small-ring to small-cog. This also results in increased wear because of the lateral deflection of the chain.

Internal hub gearing works by planetary, or epicyclic, gearing, in which the outer case of the hub gear unit turns at a different speed relative to the rear axle depending on which gear is selected. Rear hub gears may offer 2, 3, 4, 5, 6, 7, 8, 9, 12, or 14 speeds. Bottom bracket fittings offer a choice of 2 speeds, and are generally foot-operated. Internal hub gears are immune to adverse weather conditions that affect derailleurs, and often last longer and require less maintenance. However, they may be heavier and/or more expensive, and often do not offer the same range or number of gears. Internal hub gearing still predominates in some regions, particularly on utility bikes, whereas in other regions, such as the USA, external derailleur systems predominate. In a typical hub gear mechanism the mechanical efficiency will be between 82% and 92% depending on the ratio selected. Which ratios are best and worst depends on the specific model of hub gear.

Fixed-gear track racing bikes can achieve transmission efficiencies of over 99% (nearly all the energy put in at the pedals ends up at the wheel). Biomechanical factors however determine that a human can deliver maximum power only over a narrow range of crank rotational speed or cadence. To match the power source with the load under varying conditions, a variable gear ratio is needed, and they work very well, though at the expense of mechanical efficiency. The efficiency varies considerably with the gear ratio being used.

There have been, and still are, drivetrains that are quite different from those above:

With a derailleur-based multi-speed bicycle, the gears can be denoted by the number of teeth on the front chainring and rear sprocket, for example the highest gear on a racing bicycle might be 53x11. For a road-racing cyclist, this is useful because of the standard size of the wheel. However, this measure is limited because it does not specify other aspects of the system. Gear inches and metres of development are related measures that include the diameter of the rear wheel. Gain ratio is a measure which also takes the length of the crankarms into account.

With a hub gear, gear ratios are given directly.

Gear inches and meters of development of a gear combination are defined:

Metres of development corresponds to the distance (in metres) traveled by the bicycle for one rotation of the pedals. Gear inches has no current physical significance; it corresponds to the diameter of the main wheel of an old-fashioned penny-farthing bicycle with equivalent gearing. To convert from gear inches to metres of development, multiply by 0.08 (more exactly: 0.0798, even more exactly: 0.07979645 ...).

The table below shows distance traveled in metres per pedal revolution for a typical sprocket configuration on a 27 inch bicycle. Note that the two highest gears use the large front sprocket, the two lowest gears use the small front sprocket, while for all other gears, it is necessary to shift both front and rear sprockets to access the next higher or lower gear ratio. Some gears, indicated by asterisks (*) may have less favorable chain geometry due to crossover between inner and outer sprockets.

The following table compares gear inches, metres of development, and gain ratio for 170 mm cranks and 700c wheels (diameter 70 cm). Speeds for several cadences in revolutions per minute are also given.

Only those who want to go really fast will need a gear much above 100, though gears as high as 250 have been reported for specialist racing. Cyclists who are fit and strong will find that a low gear of around 40 -50 gear-inches is quite adequate for almost all on-road use. Other cyclists may prefer a somewhat lower gear, perhaps around 20 or 30. The lowest feasible non-specialist gear (as of 2005) is around 15. Tricycles can be bought with gears as low as 8, but such low gears are not really suitable for bicycles due to the problems of balancing at very slow speeds.

Several gear ratio calculators are linked below. Such calculators are more useful if they show the percentage difference between gears as well as the nominal gear ratios. These calculators require the number of teeth on each gear wheel on the bicycle and the diameter of the back wheel. Standard road wheels, labeled 700c are 70 cm in diameter with the tyre; the smaller 650c wheels are 65 cm in diameter. Mountain, cruiser, and most other types of wheel are 26 inches with tyre.

For gain ratios they also need to know the length of the pedal cranks in millimetres (crank lengths are normally some multiple of 2.5 mm). If the bicycle has an enclosed gear system (hub or bottom bracket), then details of these gears are also needed (make and model is enough for some calculators).

The following gear ratios were calculated using a 700c rear wheel. Similar ratios can be obtained for any size wheel by adjusting the size of the chainring and/or the rear sprocket.

It is possible to get almost any combination of chainwheel sizes and cog sizes, but it is much cheaper to use standard combinations.

Scenario: between 5 and 10 miles each way on working days, plus occasional longer trips.

Scenario: Longer trips of 30 to 60 miles per day, heavily laden.

A modern racing bicycle is often equipped with a double-chainring crankset at the front and a 9-speed or 10-speed cassette at the back. Since wheel size is standardized, the gearing system is often described by stating the number of teeth in the chainrings and cogs. For example, the front chainring gearing is denoted "53/39", meaning that it has 53- and 39-tooth chainrings on the crankset. The rear cassette is denoted by its smallest and its largest. For example, a "12-25" means that the smallest has 12 teeth, and the largest has 25 teeth. Nowadays 9- and 10-speed cassettes are commonplace, which make the choice of intermediate gears less important than when there were only 5 cogs available in a cassette. These cassettes typically have a 7% step on the top 6 or 7 gears, and an 11% step on the lower gears.

Except in special circumstances, most professionals use a combination of a 53/39 front gearing. Some sprinters like to use a larger chainring at the front, up to 54t or 55t. In some races involving steep climbs, some professionals opt for a triple chainring at the front to accommodate a smaller gear. Recent popularity of the compact drivetrain allows the use of smaller chainrings at the front, usually a 50/34 or 50/36 combination. This allows the use of a double-chainring drivetrain and having the lower gearing needed for the climbs.

Typically cross country mountain bikes will be fitted with a triple crankset, using 22, 32 and 42 tooth chainrings. The rear cassette is usually an 11 to 32. For downhill specific bikes, road type cassettes may be fitted to provide smaller steps between gears, along with cranksets fitted with one or two drive rings and a bash ring, which takes the place of the largest chainring, and is simply a reinforced, toothless ring, designed to protect the smaller two chainrings from impact via logs, rocks, deep ruts, crashes, etc.