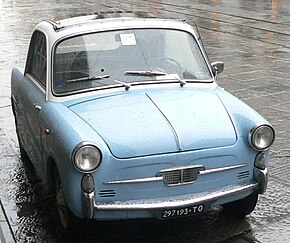 The Bianchina was an automobile produced by Italian automaker Autobianchi, based on the Fiat 500 mechanicals. It was available in various configurations, Berlina (saloon), Cabriolet (roadster), Trasformabile (convertible), Panoramica (station wagon), and Furgoncino (van).

George Lucas was given a Bianchina by his father, which Lucas then modified and entered it into races until he was hospitalised after crashing the car on June 12, 1962 on a public road.