Alfa Romeo in Formula One

Alfa Romeo participated in Formula One, as both a constructor and engine supplier, from 1950 to 1988.

In 1950 Nino Farina won the inaugural Formula One World Championship in a 158 with supercharger, in 1951 Juan Manuel Fangio won while driving an Alfetta 159 (an evolution of the 158 with a two-stages compressor). The Alfetta's engines were extremely powerful for their capacity: in 1951 the 159 engine was producing around 420bhp but this was at the price of a fuel consumption of 125 to 175 litres per 100 km (1 mpg–U.S. / 2 mpg–imp). In 1952, facing increased competition from their former employee, Ferrari, Alfa Romeo, a state-owned company, decided to withdraw after a refusal of the Italian government to fund the expensive design of a new car. Surprisingly, Alfa Romeo involvement in racing was made with a very thin budget, using mostly pre-war technology and material during the two seasons. For instance the team won two championships using only nine pre-war built engine blocks.

During the 1960s, several minor F1 teams used Alfa Romeo straight-4 engines in cars such as the LDS Mk1 and Mk2 "Specials", Coopers and De Tomasos.

Alfa Romeo briefly returned to Formula One for the 1970 and 1971 seasons with a V8 engine based on their sportscar unit. In 1970 the unit was mainly entrusted to Andrea de Adamich, a long time Alfa driver, in a third works McLaren. The combination often failed to qualify and was uncompetitive when it did run in the races. In 1971 a similar arrangement saw de Adamich run most of the second half of the season in a works March car, with a similar lack of success.

For 1976 Bernie Ecclestone did a deal for the Brabham Formula One team to use Alfa Romeo engines based on their new flat-12 sports car unit, designed by Carlo Chiti. The engines were free and produced a claimed 510bhp against the 465bhp of the ubiquitous Cosworth DFV. However, packaging the engines was difficult - they had to be removed in order to change the spark plugs - and the high fuel consumption engine required no fewer than four separate fuel tanks to contain Template:Convert/impgalTemplate:Convert/test/A of fuel. Murray's increasingly adventurous designs, like the BT46 which won two races in 1978, were partly a response to the challenge of producing a suitably light and aerodynamic chassis around the bulky unit. When aerodynamic ground effect became important in 1978, it was clear that the low, wide engines would interfere with the large venturi tunnels under the car which were needed to create the ground effect. At Murray's instigation Alfa produced a narrower V12 design in only three months for the 1979 season, but it continued to be unreliable and fuel inefficient.

During the 1979 Formula One season, and after some persuasion by Chiti, Alfa Romeo gave Autodelta permission to start developing a Formula One car on their behalf. The partnership with Brabham finished before the end of the season. The Alfa Romeo 177 made its debut at the 1979 Belgian Grand Prix. This second Alfa works Formula One project was never truly successful during its existence from the middle of 1979 until the end of 1985. During this period Alfa Romeo achieved two pole positions, three 3rd places, two 2nd places and one fastest lap, the team's best season being the 1983 season when the team achieved 6th place in the constructors' championship. The team was effectively outsourced to Euroracing in 1984, with works engines being supplied by Autodelta.

For the 1987 season, Alfa Romeo made a deal to supply engines to Ligier. A Gianni Tonti designed twinturbo 1500 cc straight-4 was tested in a Ligier JS29B[1] by René Arnoux. When Fiat took control of Alfa Romeo, the deal was cancelled (ostensibly due to negative remarks by Arnoux about the engine) and Ligier had to use Megatron (ex BMW) engines for the entire 1987 season.

Alfa also supplied engines to the tiny and unsuccessful Italian Osella team from 1983 to 1988. Normally-aspirated (1983) and turbo (1984-1987) engines were used. In the beginning, Alfa also offered some technical input to the small Turin team; The 1984 Osella (the model FA 1/F) was based on the 1983 works Alfa Romeo 183T, indeed the first chassis was a lightly reworked 183T. All the following Osella models up to the FA 1/I in 1988 had their origins in the initial Alfa design.

By 1988, the last turbo season, Alfa was fed up with the negative publicity generated by Enzo Osella's cars, so the Milan-based manufacturer prohibited the further use of its name in connection with the engine. The 1988 engines were simply dubbed "Osella V8". At the end of that season, the relationship finished, ending Alfa Romeo's involvement in Formula One. 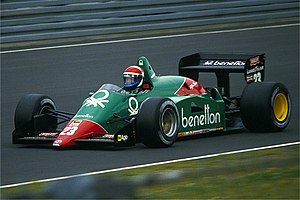 In 1988 Alfa Romeo (Fiat Group) bought Motor Racing Developments Ltd. (otherwise known as the Brabham F1 team) to built a chassis for a new ProCar series. The car developed was V10 powered Alfa Romeo 164 ProCar (Brabham BT57) and was planned to race in a special racing series (as a support event to Formula One Grands Prix).